THE NATIONAL RALLY IN LANCASHIRE, w/e of September 8th,9th,10th 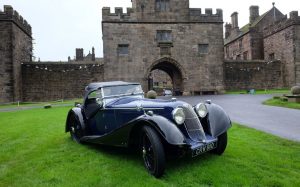 Much enjoyed by everyone who came, I believe and hope.

It all started about 18 months ago when the Rally Committee (four East Anglia members and spouses, me and Tessa) decided that in 2017 the National Rally (NR from now on) should be held “oop North” somewhere, as it had not been up here since 2005. The question was, where? At this point two Northern Centre members were co-opted so that various ideas and searches could be made. They were Norman Hamer and Richard Neville.

Eventually after a lot ooing and arring with emails going hither and dither, a Macdonald Hotel the Kilhey Court at Worthington a few miles north of Wigan was chosen as being suitable. It was not far from the M6, it wasn’t amongst the dark satanic mills the North used to be famous for, (although some Southerners still think the place is covered with them) and not far from a choice of some great places to go and visit during the weekend.

Because Norman, Richard and I were on the spot so to speak, it worked out that we would plan the trip out on the Saturday and the other for the Sunday. We would also coordinate with the hotel about the Rally HQ and Rally Dinner locations within the hotel and car parking arrangements. The East Anglians, led by Tony Hipperson, Nick Walton, Linda Gidley, Jill and Patrick Wilson, organised the entry forms, the contract with the hotel, the raffle prizes, goody bags and the trophies for the prize giving. I’m glad to say that this division of the tasks worked very well and all info, progress reports and any problems were all shared by email.

People started to arrive in a steady trickle on the Friday, with the Rally Committee all aboard by mid- morning with Tony and Co. arriving and staying the night before. Each goody bag handed out contained a £5 voucher for NGK spark plugs, a publisher’s catalogue of books about cars, transport vehicles and peoples’ exploits with them, special offers from insurance companies and to give a local flavour, a carton of Lancashire Tea containing 80 sachets and a packet of Fisherman’s Friends. Stuart Dawson, as nice a chap as you would wish to meet and a proud Tyke, reported back to me that he and Anne had tried the tea – being fairly local, they came both Saturday and Sunday, but went home Saturday night – and said they couldn’t taste any difference between the Lancashire Tea and Yorkshire Tea, which of course in reality and taking into account Yorkshire pride, means the Lancashire Tea actually tasted better!

We had arranged for the rally HQ to be located in the Worthington suite which was a pleasantly big room and the AGM was to be held there that evening. Unfortunately an accident on the M6 in Cheshire between two lorries resulted in the closure of the motorway and this resulted in much delayed arrivals of those caught up in the fracas. However our Chairman arrived in time for the AGM and this took place on time at 6-00pm with 40 or so attending. After the meeting people went to the bar and restaurant for informal evening meals. 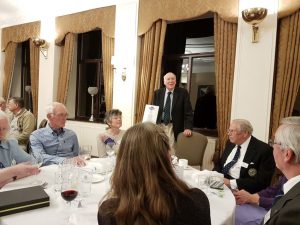 However the highlight of the evening and by this time the rain was coming down, was the arrival in grand style with a big grin on his face and wearing goggles, of our President Victor Riley. He had been kindly given a lift from Shropshire by Tony Maddison in his Big 4 Special with only aero screens for protection against the wind and rain. I said to Victor as I helped him out – the car did not sport doors – “Aren’t you frozen to death?” for he didn’t look particularly well wrapped up. “No, the engine kept me nice and warm” said he. 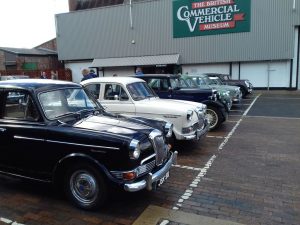 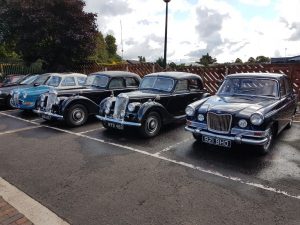 After a somewhat slow service at breakfast, everyone set off for the National Commercial Vehicle Museum at Leyland on a scenic route devised by Norman who in fact organised the whole outing. Before everyone disappeared to go to Leyland , Bob Hodgkins our Spares Manager was having a busy time. He had arrived on Friday evening with a van load of spares which took up space over 4 trestle tables. Also busy was the merchandise table with people looking and buying various goodies such as badges, t shirts, baseball caps and Riley ties. All the comments I received on their return from the visit to the Museum were very much enthusiastic about the trip. Richard Neville had plotted for those who were interested to see more of the County a further scenic and wandering route back to the hotel. Others in the afternoon took other trips to other interesting places such as Smithills Hall, Bolton, Rufford Old Hall and Samlesbury Hall a Tudor Mansion near Preston, reputedly haunted (you don’t see him, but it suddenly goes cold as he passes you!). 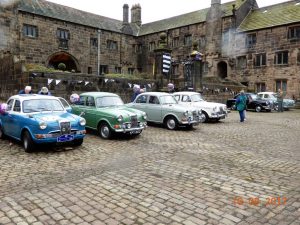 The Rally Dinner was a splendid affair set in a beautiful and fully carpeted room, which certainly helped with the acoustics. Blue Diamond Services very kindly gave the Club £200 towards the cost of the drinks before the Dinner which was much appreciated by everyone and so many thanks to them.

Almost everyone enjoyed the three course dinner and this was followed by the handing out of the raffle prizes, which had been donated by various members and sponsors and I thought were of a high standard. Our Chairman Mike Stanton announced that next year’s NR would be located at Upton Leonard in Gloucestershire.

The weather continued to be very mixed throughout the weekend, but it certainly did not spoil the trip to Hoghton Tower on the Sunday. We arranged with them that all the Rileys would be parked on the large sloping grass area in front of the battlements, except for the seven 1.5s which were celebrating 60 years since they were first manufactured. These were parked in the lower court yard of the Tower and thanks go to Norman, who provided each car with a floaty 60th birthday balloon tied to the offside front door handle. 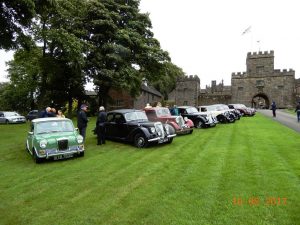 Members who had paid to go on the one hour long Tour then walked up to the second court yard. Having been introduced to the tour guides, they were taken round the house in two groups. All said how interesting it all was with many tales concerning the Tudor and Stuart kings and queens, one of which was that there had nearly been a King Henry the 9th. For those not on the Tour, there was a very nice tea room where they could have tea or coffee in a relaxing atmosphere. After the Tours were completed we were all led to the Smoking Room for a sumptuous buffet lunch laid on by the tea room chef and very good it was too. They had even lit a log fire in the huge fireplace and this was very welcome as the weather was a bit cold and damp outside.

Following the visit, all returned to the hotel for the Concours prize giving and distribution of the prizes from the second raffle. The Master of, or should I say Mistress of Raffle Ceremonies Jill Wilson conducted the raffle proceedings with her usual iron hand. At one stage during these proceedings, she raised this up and then asked us all what it meant. Before she could tell us that it meant she wanted hush, some bright spark piped up “Please can I be excused Miss?” 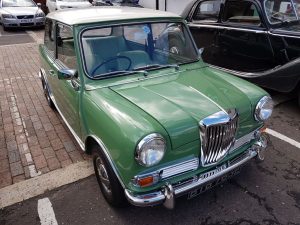 The top car of the Rally voted by everyone was the Green Elf of Malcolm and Norah Pritchard and well deserved too. So hearty congratulations to them. All the other trophy winners are listed below. However I have to say that if a trophy was to be awarded to the most enthusiastic member who appeared to greatly enjoy all the visits, the countryside and the hotel, then that would have to be awarded to David Body. He had also decided to stay on another night so that he could explore more of the County Palatine.

So we celebrated yet again the Riley marque and another National Rally of The Riley Motor Club. Also another very enjoyable social get together of members, including Frank McKee , Chairman of the Ulster Riley Club and his wife Pat; Jim Dunbar, President of the Scottish Riley Enthusiasts and his wife Laura and Peter Sawley from Australia. 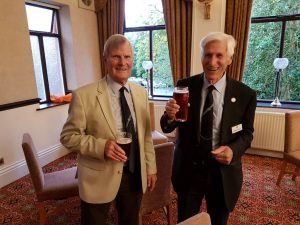