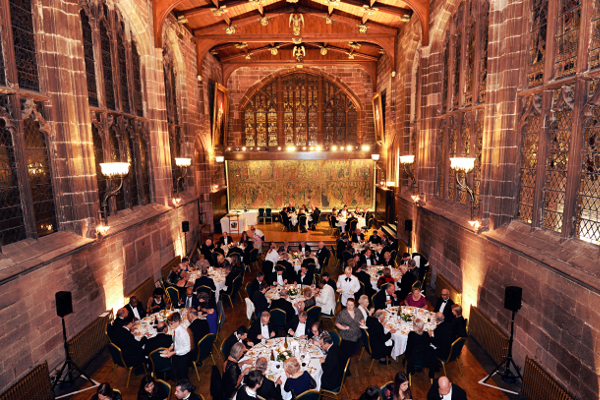 On Friday the 28th of June at midday we will be having the 2nd Riley Archive Project lunch. Since that first meeting momentum and interest have increased phenomenally. We have selected a larger venue so that more of our supporters are able to attend. We’ve managed to negotiate the same price as our last lunch which is £35.00 each!

The lunch will be held at St Mary’s Guildhall in Coventry. This beautiful building has graced Coventry since the 14th Century and has a wealth of historical stories connected to it. It’s hosted Royalty, stored arms for the Civin War and even seen William Shakespeare performing.

The Guildhall rooms contain collections of early arms and armour as well as period furniture and artworks. The main attraction is the main hall where we will be having our RAP lunch. It has medieval stained glass (as you see above), a ceiling of carved angels and dominating the front wall is one of the rarest and most important tapestries in the country! You won’t be
disappointed.

The Guildhall was originally part of the castle site and was the centre for Guild business, ceremonies and banquets. One of the famous guests was Mary Queen of Scots who was a prisoner there in 1569. Another was King James II who had a banquet with so much food that the table collapsed and Corporation Custard was created which is still a local delicacy. King Henry V and VI were also entertained in the hall and King Henry VII hosted the very first feast of the Tudor dynasty at St Mary’s.

Back in 1485 the new King Henry stopped in the city just days after defeating Richard III at the Battle of Bosworth and bringing an end to the Wars of the Roses.

Miraculously the Guildhall largely survived the devastation of the Blitz and continues to serve the city today as a major venue for civic functions, weddings and private functions. Thanks to CitiVision/City Council for the content and images.